This talk explores the value of understanding Britain's relationship to its coasts, shores, and beaches via the nation's own gothic literary tradition.

This talk explores the value of understanding Britain’s relationship to its coasts, shores, and beaches via the nation’s own gothic literary tradition.

Reflections on national borders, boundaries, and limits are not unique to Britain currently: commentary on these aspects of the nation state have inflected political and cultural discourse for many years now for numerous nations; the border between Mexico and the United States of America is one particularly prominent example we might point to. But Britain, this talk argues, has a peculiarly fraught and longstanding fascination with its own coasts – those spaces that might, imaginatively at least, represent the edge of the nation. And it is a relationship whose history seems traceable not just by attending to the way the coasts have figured in political discourse, but the way in which this discourse is reflected in, and challenged by, Britain’s tradition of gothic literature.

As a genre, the gothic is especially well suited to exploring haunting and haunted spaces and situations of terror or horror; it is also a genre that thrives in what we might call liminal spaces – thresholds between two different environments or worlds. The coast provides the gothic with a dramatically evocative place in which to stage numerous kinds of haunting: images of shipwreck, of waves lashed by storm and drenching the shorelines, of buildings teetering precariously on cliff-edge, and the unsettling sense that something – anything – might wash-up on the shore... All of this provides a rich repository of material for the gothic to exploit.

But this is not just about the fantastical or supernatural worlds conjured up by the gothic. The gothic is – and has always been – a genre with an abiding interest in the politics of its time, of the here and now. The gothic wants us to confront that which haunts us, that which we may fear, or that which troubles us, in order for us to better comprehend the world in which we live and our own relationship with that world and its other inhabitants. It is hardly surprising, then, that the gothic should turn to the coast in order to interrogate the very real spectres that seem to haunt Britain’s shores. Indeed, the gothic novel emerges roughly at the same time as the beach itself becomes a desirable location for holidaying and recreation: these two things grow up side-by-side, as it were. In more recent years, we have seen the beach and the shore become a political hot-spot for often divisive conversations about migration, fishing rights and national autonomy, climate change and sea-level rises, and about the recent global pandemic. The gothic, like a vampire, has latched onto these topics with eagerness.

This talk explores what we can learn from the gothic about our relationship with the coast and its numerous histories, taking in a number of classic and more recent stories about our haunted shores, including Daniel Defoe’s Robinson Crusoe, Bram Stoker’s Dracula, Helen Oyeyemi’s White is for Witching, Andrew Michael Hurley’s The Loney, and Daisy Johnson’s Fen. 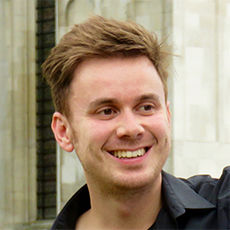