A Triassic herbivore, known for its supposed similarities to a modern-day ostrich, has been revealed to have entirely different approach to feeding from previously thought, according to new research.

A Triassic herbivore, known for its supposed similarities to a modern-day ostrich, has been revealed to have entirely different approach to feeding from previously thought, according to research at the University of Birmingham.

The new discovery reveals a much broader diversity of herbivore behaviour during the Triassic period than has been recognised to date.

Called Effigia, the animal was about the size of a gazelle and lived in North America around 205 million years ago. Its fossil remains were found in the Ghost Ranch Quarry in New Mexico in the 1940s, although the material was not formally described by palaeontologists until 2006.

The remains had been relatively poorly preserved in the quarry and the skull, in particular, was quite badly deformed, making accurate reconstruction problematic. Early analysis of the specimen concluded that it belonged to the group of reptiles that includes crocodylians and birds and which started to flourish in the Triassic period.

Although more closely related to crocodylians, Effigia’s lightweight body, elongated neck, large eyes and beak shared many similarities with a modern-day ostrich, leading researchers to believe the animal fed by pecking plant material from the ground.

The herbivores we already recognise in the Triassic period fed either by digging for roots, such as the pig-like aetosaurs, or reaching for leaves high up in the treetops, like the long-necked sauropods. These two-legged browsers with a weak bite are unique to this period and show a previously unrecognised diversity among the herbivores of this period.

The team used new CT scans of Effigia’s skull which revealed a much more accurate reconstruction of the animal. This included new information about the shape of the skull, such as a more rounded, bulbous brain cavity and curved upper and lower jaws. Unlike an ostrich bill, which is more rounded, Effigia’s bill is more concave with jaws that open and close a bit like a pair of shears.

The team used this information to model the effects of different forces acting on the skull, including what happens when the animal pecks at the ground. By modelling the forces the skull would need to withstand in order to feed by pecking, the researchers calculated that Effigia’s skull would probably have shattered. Instead, they suggest, the animal would be more likely to use its jaws to snip off and nibble pieces of soft plant material such as young shoots, or ferns. 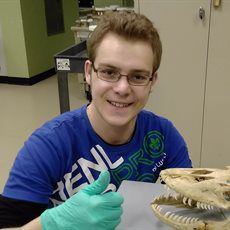