MA Shakespeare and Creativity student Paige Calvert tells us more about the recent Directing Workshop and what she gained from the session.

As a student in the MA Shakespeare and Creativity cohort, Wednesday is the day of the week dedicated to our Shakespeare Ensemble module in which we are tasked to devise a new play, rooted in a brief, responding to Shakespeare. We are performing our final project at the Birmingham Repertory Theatre in June.

This is always a full day of learning, collaboration, and creation within our small company, but this special Wednesday had something magical about it when we were given a master class in Directing from Kimberley Sykes (RSC As You Like It 2019, RSC Dido, Queen of Carthage 2017).

I felt the intensity of Kim’s connection as soon as she began our session. Her dedication to her craft and to the time she would spend with us that day became a palpable sensation in the room. Kim led us through a series of exercises that would prove to unite our company as one, living organism. She showed us that the director has the power and the responsibility to help connect the members of an ensemble, especially when working together to devise a new work. She met us with an open heart and full mind at where we were at in our project and tangibly supported and inspired our journey as we made this new, creative endeavour as a company.

We discussed our potential themes and sources of inspiration based on our brief: “Talking back to Shakespeare, talking to the 21st century.” How do we create something that is in dialogue with Shakespeare’s works, his legacy but also specifically connects to our time, right now? Kim helped us see how rich Shakespeare’s texts are as direct source material: “Look at what I can do with this, look at what we can create with this!” The source text generates inspiration if you’re willing to dig and work together to expose the depths that Shakespeare’s texts can hold. By uplifting and empowering the director within our own company, she led by example in showing how a director facilitates the talents of the ensemble members around them to be their very best.

Kim took the time to learn about the many hats that each ensemble member wears and listened when we told her about our concepts, our excitements, our hesitations. She described the early rehearsal period, our project’s status at the time of this workshop, as the time to “push the limit” because “theatre’s about dreaming.” She brought up how it is the director’s responsibility to ensure a cohesive vision throughout all elements but to also have the courage to stand up and say if something’s not working. As we were in the early stages of trial and error ourselves, she became a guide and mentor during the session to help us see where we could “push the limit” of what we were thinking and doing.

The importance of truth

Throughout Kim’s exercises, she championed truth above all else. Truth as a concept, both on and off of the stage, manifested itself that day as an emphasis on presence and play. She said, “There is no substitution for being present on stage.” You can sense it in the room, when someone is not fully present in the scene, the exercise, the work.

There is no resting on your laurels, or previous training when working with Kim. She described how she wants her actors not to rely upon their “factory settings”, their known/safe/tried and tested responses to a scene or a relationship between characters. Don’t try to show off or give what you “think” something should look like. Just be in the moment, and be truthful to that moment. And that’s exhausting work, it really is. You are sharing everything you can with the rest of the ensemble and that energy connects back with the audience.

Another aspect of that something special that we worked on was the idea of play. That once you have your scenes, or your locations or your characters you have to do more than just be those things in space. You must play. Kim described it as, “Find the game and play it hard.” This is the idea of raising the stakes within a scene, perhaps known to the audience, perhaps not, which helps push the actors beyond their “factory settings” and to create an energy and intensity in the moment because you are playing the game.

I felt lucky enough as an actor to experience what that exactly means during an exercise where I did an improvisation with another ensemble member where we explored the tenuous relationship between Ophelia from Hamlet and a mother figure that was dealing with mental illness. In our first attempt, I was just talking with my mother and got across the assigned bits of dialogue. In our second attempt, Kim then gave us “the game”: Ophelia’s mother couldn’t talk back to her. This made all of my questions, all of my pleading all the more frantic because I was trying to win “the game” that was stacked against me. In our third and final attempt, another layer was added where we connected this improvisation with the nunnery scene in Hamlet moving from our modern language straight into Shakespeare’s text. Playing “the game” where Ophelia’s mother doesn’t speak to her and then immediately being betrayed and belittled by Hamlet elevated my own acting and I felt unbelievably present in the scene. In the room, once the scene was finished, you could hear a pin drop. That something special had happened.

What I gained from the workshop

I walked away from our day with Kim, both emotionally drained (in the best way you can be as a performer) but also enlivened and inspired by the work we were able to devise under her tutelage.

Without the University of Birmingham’s connections with the Royal Shakespeare Company, this collaboration and learning could not have been possible. The Shakespeare Institute provides me with such opportunities that are unlike any other graduate program I know. To spend an entire day, unfiltered, and completely immersed with Kim Sykes was a gift. The ability to learn from practitioners, especially a strong, intelligent, giving woman like Kim, only enriches my experience in this MA program which beautifully weaves together both traditional academia and theatrical practice. 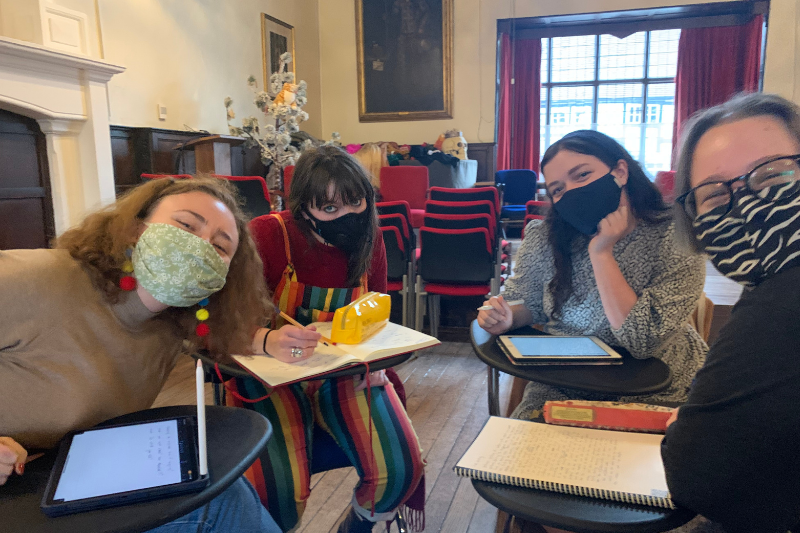 MA Shakespeare and Creativity student Chloe Otterson tells us more about the recent Writing Workshop and what she gained from the session.