EDACS academic Dr West was invited to share her research on BBC Radio 3’s Free Thinking in an episode on Bloomsday, Dalloway Day and 1922.

EDACS academic Dr Emma West was invited to share her research on BBC Radio 3’s Free Thinking with presenter Shahidha Bari and guests Cleo Hanaway-Oakley and Merve Emre in an episode on Bloomsday, Dalloway Day and 1922.

Dr West shared research into the little-known Arts League of Service Travelling Theatre, conducted as part of her British Academy-funded postdoctoral project Revolutionary Red Tape. Between 1918 and 1937 the ALS Travelling Theatre gave thousands of performances in villages and towns across Britain, from Essex to the Isle of Arran. Their repertoire ranged from highbrow experiments to hits from the music hall. Travelling around in a battered old van, and often staying in their audience’s homes, the ALS aimed to ‘bring the arts into everyday life’. Read more about the ALS Travelling Theatre at Emma West’s Revolutionary Red Tape blog.

Free Thinking: Bloomsday, Dalloway Day and 1922 is on at 10pm on Wednesday 15 June on BBC Radio 3. You can listen again after the broadcast via the BBC website/BBC Sounds. 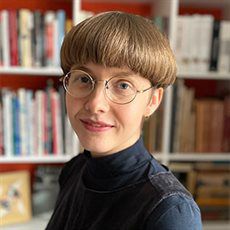