Honorary degrees given to 11 individuals involved in sport, business, public health and journalism in Summer 2022 graduations.

World-class sporting alumni are among recipients of honorary degrees during the University of Birmingham’s 2022 summer graduations.

Olympic middle distance runner Hannah England and British Paralympic Association Director of Sport Penny Briscoe OBE have been awarded honorary degrees in 2022, collecting their second degrees from the University of Birmingham. England, a Biochemistry graduate from 2009, returns to the University after a distinguished career as an athlete, mentor and commentator.

Alongside sporting success, honorary graduates from the world of journalism, finance and law join public health experts who have all made a significant improvement to society.

Professor Jim Al-Khalili, presenter of BBC Radio 4's The Life Scientific and Distinguished Chair in Theoretical Physics joins Femi Oke, a journalist and broadcaster working with Al Jazeera and NPR, and English Language and Literature alumni from 1988 in receiving honorary degrees. In addition, Director of Public Health for Birmingham City Council, Dr Justin Varney, who is working across the city to improve the health and wellbeing of citizens, was presented a degree.

Richard Haywood is an alumnus of UoB having graduated in law in 1977. Richard is a corporate lawyer by background having been a partner of Reynolds Porter Chamberlain LLP, the City law firm, and now takes on roles as an investor in and non-executive director and Chairman of private equity backed businesses. Richard has been a lay member of the Council since 2012 and Deputy Pro-Chancellor since 30th November 2014.

Femi Oke is an award-winning journalist, broadcaster, co-founder of the diverse moderator’s bureau "Moderate The Panel," and an English Language and Literature graduate from 1988. Femi presents Al Jazeera's global affairs discussion show “The Stream”, is a correspondent for the Al Jazeera documentary series "Fault Lines", and the social media correspondent for NPR's news programme "Here and Now."

Hannah England studied Biochemistry 2005-2009 at the University of Birmingham. Following graduation Hannah remained living and training in Birmingham and benefitted from crucial support from the Sports Scholarship department throughout her athletics career.

Professor Jim Al-Khalili is an academic, author, broadcaster and one of the UK’s best known science communicators. He holds a Distinguished Chair in Theoretical Physics at the University of Surrey where he conducts research in quantum physics. He has written fourteen books on popular science, between them translated into over twenty-six languages, a regular presenter of TV science documentaries and hosts the long-running BBC Radio 4 programme, The Life Scientific.

Professor Sir David Eastwood retired as the Vice-Chancellor of the University of Birmingham in December 2021. Sir David previously served as Chief Executive of the Higher Education Funding Council for England (HEFCE), a post he held from September 2006. While at Birmingham he has also held senior roles on a number of sector and regional groups including as Chair of the Russell Group, Universitas 21, Universities Superannuation Scheme (USS), and UCAS.

Dr Justin Varney is the Director of Public Health for Birmingham City Council, leading work across the Council and with system partners to improve the health and wellbeing of citizens.

Originally training in General Practice, Dr Varney's career has included roles in the NHS, local and national government and he has a strong background in building partnerships across the public, private and community sector to improve people’s health and wellbeing. He has led national programmes of action on physical activity, health and work, sexual and reproductive health and HIV prevention, pharmacy and allied health professionals.

Penny Briscoe is Director of Sport at the British Paralympic Association, having previously been appointed as Performance Manager. She is also a UK Sport Mission Control Panel member, responsible for overseeing the performance progress of all Olympic and Paralympic funded summer and winter sports and offering expert support and advice when responding to any issues or challenges they or their athletes may face.

After graduating from the University of Birmingham in 1986, Nick Owen CBE joined Arthur Andersen in London where he trained as a chartered accountant. He has worked as a transformation consultant and advisor to multinational companies for Andersen and then Deloitte after their combination in 2002. He retired after six years as Chair of Deloitte UK and is now an investor, advisor and non-executive director to a number of private sector and charitable organisations including Teach First, RNCSF and Macmillan. 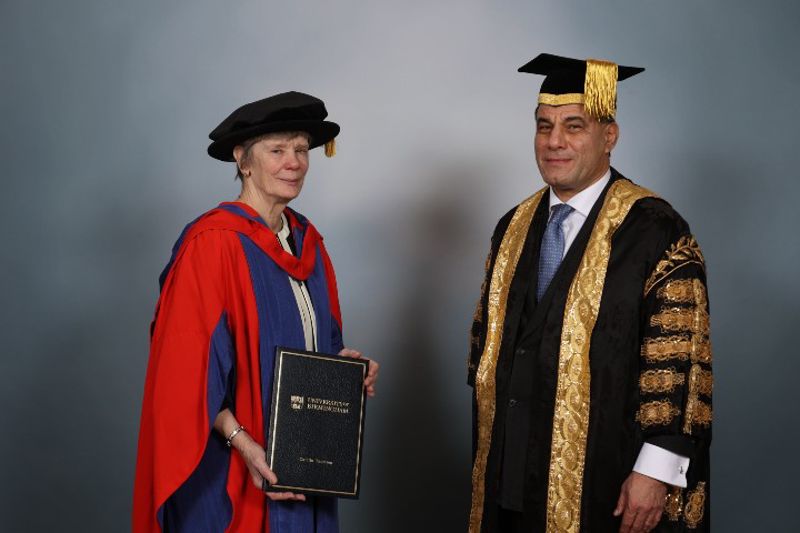 Colette Thomson MBE, Assistant Coach for the England U21 Netball Team, has been awarded an honorary degree by the University of Birmingham.