Seeing the unseen: birth and death of tree roots under a future atmosphere

This flow of extra carbon below ground is an important, and often overlooked, way in which the natural world will respond to ongoing and future greenhouse gas emissions.

In a new study, led by the Universities of Birmingham, in the UK, and Bergen, in Norway, researchers have shown that atmospheric CO2 pumped into a mature forest at levels predicted to be the norm by 2050 will cause trees to produce more and longer roots.

The research, published in Science of the Total Environment, was carried out in the Free-Air CO2 Enrichment (FACE) facility, operated by the Birmingham Institute of Forest Research (BIFoR). It complements earlier research which shows the same trees will increase their rate of photosynthesis by up to a third under elevated CO2 conditions.

BIFoR FACE is a ‘sci-fi’ forest, representing one third of the world’s largest experiment investigating the effect of global change on nature. It forms a giant ‘ecosystem-o-scope’ with sister facilities near Sydney, in Australia, and Manaus, in the Amazon. In each of these facilities, extra CO2 is introduced, bringing the air to what is predicted to be the norm globally by 2050. To maintain the naturalness of the forest, the CO2-rich air is added using an ‘invisible curtain’ approach without roof or walls.

In the study, a research team gathered thousands of images of tiny tree roots, sometimes less than a millimetre wide, assembled over two years in the BIFoR FACE forest. These images were used to build a mathematical picture of the birth, growth, and death, of roots in an oak forest. Some images were taken of the roots in place, using a high-res camera sent under the forest floor in a set of long Perspex tubes. Other images were from roots painstakingly teased out of cores of soil extracted from the experiment.

It’s obviously hard to view these processes going on beneath the ground. But a combination of innovative engineering and careful field and lab work from our team have helped us shed new light on this behaviour.

Professor Iain Johnston, who led the study from Birmingham and then Bergen, explained, “It’s obviously hard to view these processes going on beneath the ground. But a combination of innovative engineering and careful field and lab work from our team have helped us shed new light on this behaviour – and on how confident we can be in our findings.”

Mathematical modelling and data analysis of the images, carried out at BIFoR and at the University of Bergen, concluded that more and longer roots appear beneath the trees growing in the high carbon dioxide atmosphere.

Representing the closely-knit team of four women scientists who carried out the fieldwork and mathematical analysis, Birmingham researcher Clare Ziegler said, “This work represents a great deal of collaboration, from student volunteers to the BIFoR leadership team. The researchers echoed this collaborative spirit, using our individual strengths in environmental science, biosciences, and mathematical modelling to gain an understanding that was greater than the sum of its parts, and would not have been possible with a single-disciplinary approach."

The results support other evidence that trees do, and may continue to, provide limited protection against fossil-fuel derived increases in carbon dioxide and, hence, climate change, by absorbing and storing the carbon. Although this is by no means enough protection to significantly offset our emissions.

Colleague and researcher Angeliki Kourmouli said, “We usually take soil for granted, but it forms a crucial part of many ecosystems and plays a significant role in carbon storage. Understanding what goes on below ground when the forest experiences not only increased CO2, but also the additional stresses of climate change such as extreme weather, gives us really important insights into what we can expect in the future.”

Professor Rob MacKenzie, founding Director of BIFoR, added: “Now we have hard evidence that the extra carbon is being used, in part, to help the trees explore the nutrient-rich world beneath them. I’m tempted to say that the roots live long and prosper under the future atmosphere, but it will take more years of careful observation to be sure that is indeed the case.” 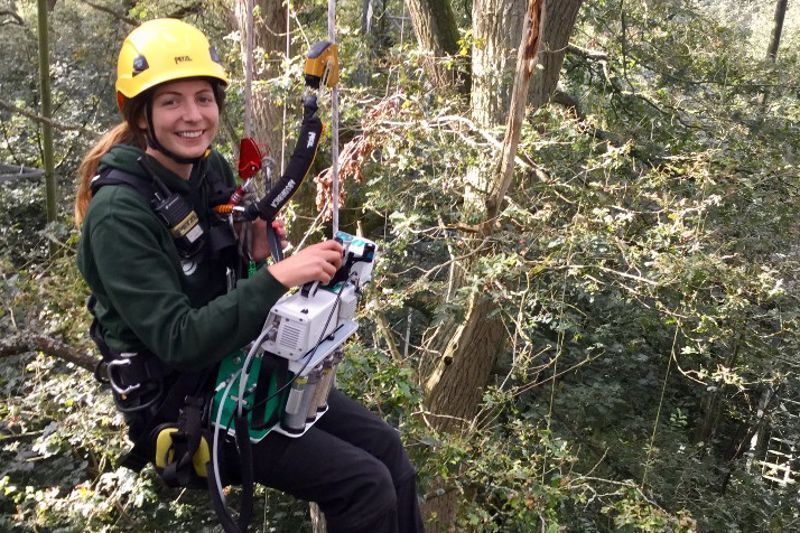 Mature oak trees will increase their rate of photosynthesis by up to a third in response to the raised CO2 levels expected to be the world average by about 2...