A new study of a tiny Triassic fossil reptile has revealed it to be a close relative of the species that would become pterosaurs.

The research, published in Nature, was carried out by a team of scientists led by Dr Davide Foffa, Research Associate at National Museums Scotland, and now a Research Fellow at the University of Birmingham. Working together with colleagues at Virginia Tech, the team used Computed Tomography (CT) to provide the first accurate whole skeleton reconstruction of Scleromochlus taylori. The fossil was first found over 100 years ago in the north east of Scotland.

The results reveal new anatomical details that conclusively identify it as a close relative of the pterosaurs - iconic flying reptiles of the age of the dinosaurs. It falls within a group known as Pterosauromorpha, comprising an extinct group of reptiles called lagerpetids together with pterosaurs.

Living approximately 240 -210 million years ago, lagerpetids were a group of relatively small (cat or small dog-sized) active reptiles. Schleromochlus was smaller still at under 20 centimetres in length. The results support the hypothesis that the first flying reptiles evolved from small, likely bipedal ancestors.

The finding settles a century-long debate. There had previously been disagreement as to whether the reptile, Scleromochlus, represented an evolutionary step in the direction of pterosaurs, dinosaurs or else some other reptilian offshoot.

The fossil of Scleromochlus is poorly preserved in a block of sandstone, which has made it difficult to study in sufficient detail to properly identify its anatomical features. The fossil is one of a group known as the Elgin Reptiles, comprising Triassic and Permian specimens found in the sandstone of the Morayshire region of north east Scotland around the town of Elgin.

The specimens are held mostly in the collections of National Museums Scotland, Elgin Museum and the Natural History Museum. The latter holds Scleromochlus, which was originally found at Lossiemouth.

This is another discovery which highlights Scotland’s important place in the global fossil record, and also the importance of museum collections that preserve such specimens, allowing us to use new techniques and technologies to continue to learn from them long after their discovery.

Dr Foffa said: “It’s exciting to be able to resolve a debate that’s been going on for over a century, but it is far more amazing to be able to see and understand an animal which lived 230 million years ago and its relationship with the first animals ever to have flown. This is another discovery which highlights Scotland’s important place in the global fossil record, and also the importance of museum collections that preserve such specimens, allowing us to use new techniques and technologies to continue to learn from them long after their discovery.”

Professor Paul Barrett at the Natural History Museum said: "The Elgin reptiles aren't preserved as the pristine, complete skeletons that we often see in museum displays. They're mainly represented by natural moulds of their bone in sandstone and – until fairly recently – the only way to study them was to use wax or latex to fill these moulds and make casts of the bones that once occupied them. However, the use of CT scanning has revolutionized the study of these difficult specimens and has enabled us to produce far more detailed, accurate and useful reconstructions of these animals from our deep past."

Professor Sterling Nesbitt at Virgina Tech said: “Pterosaurs were the first vertebrates to evolve powered flight and for nearly two centuries, we did not know their closest relatives. Now we can start filling in their evolutionary history with the discovery of tiny close relatives that enhance our knowledge about how they lived and where they came from”

In additional to National Museums Scotland, the Natural History Museum and Virginia Tech, the study also involved the Universities of Birmingham, Bristol and Edinburgh as well as the Chinese Academy of Sciences. 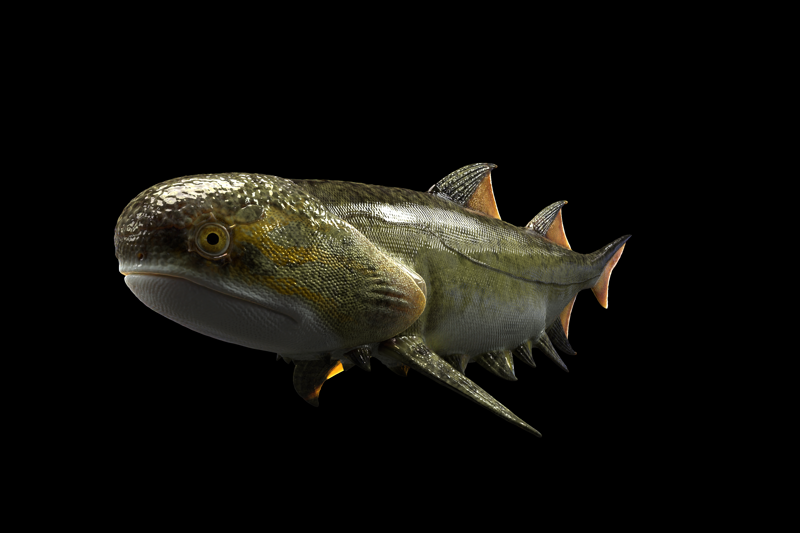 The first appearance of shark-like ‘jawed fish’ may have happened some 15 million years earlier than previously thought, according to new evidence.