Long-term twinning partnerships will provide vital support, so Ukrainian students can continue their studies, and researchers can carry on with research.

The partnership between the University of Birmingham and Ivan Franko National University, Lviv (IFNUL) is showcased in a new campaign, #TwinForHope, launched today by Universities UK.

#TwinForHope highlights the impact that partnerships between UK and Ukrainian universities are having as they twin to share resources, learning and ideas during the humanitarian crisis in the Ukraine.

Long-term twinning partnerships, such as that between the University of Birmingham and IFNUL will provide vital support in the short term, so students can continue their studies, and researchers can carry on with their research. In the longer term, this collaboration will help IFNUL to rebuild their campus and play an important role in the rebuilding of Ukraine.

The University of Birmingham and Ivan Franko National University of Lviv are immensely proud to support the #TwinningforHope campaign, having launched their twinning partnership on 28th June, Ukraine Constitution Day."

Professor Adam Tickell, Vice-Chancellor and Principal at the University of Birmingham

Planned educational collaborations, such as a summer school on Ukraine Culture, Language, and History will broaden Birmingham students’ geopolitical awareness and intercultural learning.

Both universities are sharing best practice: opening access to library and digital education resources, and introducing joint training initiatives for staff in English and Ukrainian languages.

“While dire circumstances brought us together, we have fully embraced twinning as an opportunity to forge a close and long-term alliance, helped by our strong match in academic credentials, values and traditions.

“Four months ago, only a handful of our researchers were connected, but our institutions have become close friends and learnt a lot from each other in a short space of time. Over 50 colleagues are now working together.”

Recognising the critical importance of Ukraine Constitution Day in 2022, the universities launched their partnership with a joint academic event on British and Ukrainian Constitutionalism.

Professor Robin Mason, Pro-Vice-Chancellor (International) at the University of Birmingham, commented: “Together, our universities intend to build a resilient international partnership that is purposeful, committed, comprehensive, and sustained. We look forward to working together over the coming years to fulfil the potential of the young people of Ukraine and the UK, and to supporting the future development of our two nations.”

IFNUL Rector Professor Volodymyr Melnyk commented: “We thank the University of Birmingham and the people of the UK for your solidarity with Ukraine. We trust that this partnership will be beneficial to both our universities with areas of research that have great potential for collaboration. Thank you to everyone at Birmingham for the hard work you have put into creating the foundations for a long and successful partnership.”

The #TwinForHope campaign showcases the impact that partnerships between UK and Ukrainian universities are having.

Since the start of the Russian invasion, over 95 professional pre-higher and higher education institutions have been damaged. At least nine have been destroyed. University teams and Students’ Unions have arranged mass evacuations. Some students and colleagues are now protecting their country on the frontline. Others are spread far and wide desperately trying to continue their research and studies.

More than 75 mutually beneficial twinning partnerships have already been formed between UK and Ukrainian universities. Colleagues from both the twin universities stay in regular contact via online meetings to build relationships, make plans for sustaining Ukrainian education during the war, and create relationships that will make a real difference.

Conversations so far have shown that Ukrainian universities feel supported and are excited about the benefits their partnerships will bring to their students and staff who are desperately fighting to keep education going. A wide range of organisations are providing Ukrainian universities with technology, resources and financial support to help them keep on operating and rebuild their campuses in the long term.

The twinning partnerships demonstrate university collaborations at their best. They show the power of education to unite, share hope and change people’s lives.

Vivienne Stern MBE, Chief Executive, Universities UK, commented: “I’m really proud of the way that the UK university sector has stepped up to play its part in the global response to enabling Ukrainian universities to get through this war and hopefully emerge stronger.”

UK universities are rallying together to support Ukrainian universities at their time of need - education will be a main contributor to rebuilding. This initiative is bringing hope and positivity – via practical help and contact with those outside of the situation that show comradery. 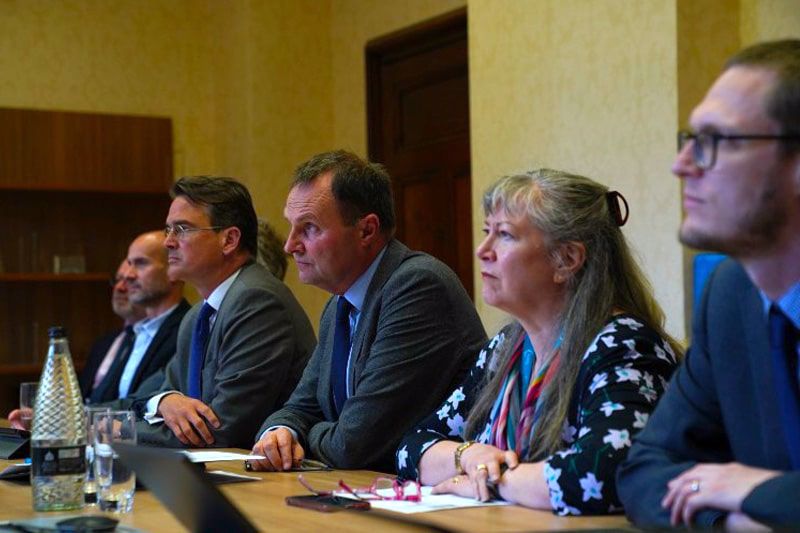