New book sheds light on the origins of modern idioms such as jumping the shark, Groundhog Day and breaking the internet

Gareth Carrol presents a collection of "modern idioms", which have become a part of our vocabulary in the past 50 years or so.

If you have ever wondered where the term 'drop the mic' came from then a new book which is to be released will uncover the mystery of modern idioms that have become commonplace in our vocabulary over the past 50 years or so.

'Jumping sharks and dropping mics - Modern idioms and where they come from' goes through the origins and use of various idioms such as "Groundhog Day", that colour our everyday communication.

Author Gareth Carrol's new book explores how these modern idioms had emerged in our language and how they may have entered our vocabulary through, TV, movies and the internet.

Groundhog Day has come to be synonymous with “déjà vu”, or a sense of things repeating themselves in a predictable fashion. The modern use of the phrase emerged very soon after the film of the same name (which tells the story of a man stuck living the same day over and over again) was released in 1993. Uses of “Groundhog Day” to describe repetitive situations became so common that by 2012 some people were decrying it as a journalistic cliché because it had become so embedded in the language. Nowadays even people who have never heard of the film would recognise the term with its modern meaning.

'Jumping Sharks and Dropping Mics' grew out of an academic and personal interest in idioms and phrases, and how they emerge, evolve and work their way into the language. The idea behind the book is to help show that, just like words, idioms are born and die out, and in the past few decades have come thick and fast from areas such as film, TV and internet culture, as well as from a range of more general sources. The book is intended to be educational and fun, and hopefully everyone learns a new phrase or two along the way.

Commenting on Jumping Sharks and Dropping Mics, David Crystal, author of The Stories of English, Let’s Talk, and How Language Works says: "An absolute delight: I wish I'd written it myself! The range of applications in new contexts is second to none. It blends etymology, social history and current usage, bringing together a wealth of British and American examples."

Published by Iff Books, "Jumping sharks and dropping mics - Modern idioms and where they come from" will be available from 25 February 2022 but is available online to pre-order.

Gareth was recently interviewed by Michael Rosen on the book and the surprising origins of modern idioms BBC Radio 4's Word of Mouth.

Gareth Carrol is a Senior Lecturer in Psycholinguistics at the University of Birmingham. His work looks at how people use and understand figurative language, including idioms, metaphor and other non-literal forms of expression. He has written articles on these topics for a range of academic journals. He lives in Birmingham with his wife and cat. 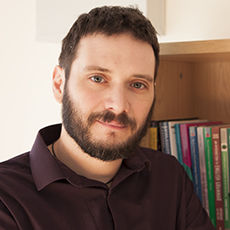